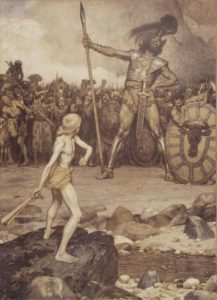 When David faced Goliath, he chose a sling over a sword. He changed the paradigm and turned a weakness, his size, into his advantage using skill and agility. He defeated an enemy who had overwhelming strength and size.

Goliath was a literal giant, but he represents the giants we face in our lives. Giants are huge, powerful and seem impossible to defeat. The giant that Life Equip Global is facing is the Global Abortion Holocaust.

These baby killing organizations seem impossible to defeat. When facing a seemingly impossible obstacle, change the paradigm. And trust God. Jesus said, ‘With God all things are possible’ (Matthew 19:26). … It is the power of God that makes what seems impossible possible. Nothing is impossible with God (Luke 1:37).

You and I are the David’s the Lord has called to respond to the Goliath of abortion. But we know that “we wrestle not against flesh and blood, but against principalities, against powers, against the rulers of the darkness of this world, against spiritual wickedness in high places. (Ephesians 6:12).

Our adversary is Satan. And he was defeated at the Cross, He has no power over us. I encourage you to partner with us. We might be tiny, but our Lord is mighty. Victory is assured!

20 Now to Him who is able to do exceedingly abundantly above all that we ask or think, according to the power that works in us, 21 to Him be glory in the church by Christ Jesus to all generations, forever and ever. Ephesians 3:20-21 (NKJV)